Someone on twitter shared this article that I found interesting. I’m curious what other people who practice code think of this: 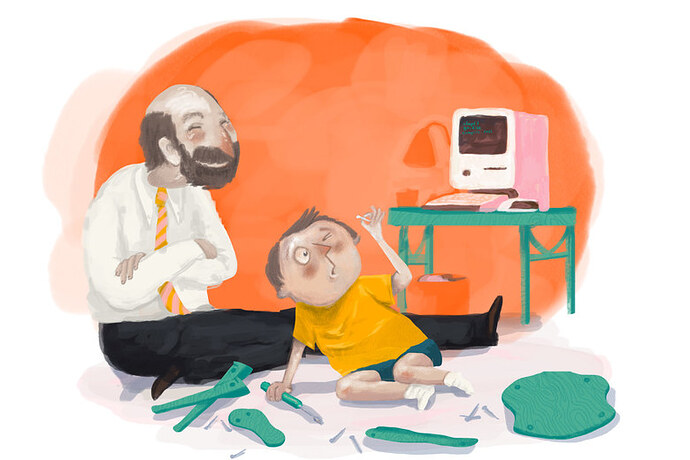 I’m a Developer. I Won’t Teach My Kids to Code, and Neither Should You.

Real coding is the difficult task of creating something unique.

I think that view is quite odd. If he is trying to say that coding is not just about syntax, then fine and I’m sure we’ll all agree.

I didn’t read the hole article. But in this paragraph I think it’s all of it condensed:

Coding is like that. Try something. See if it works. Try again. If a problem was straightforward, it would be automated or at least solved with some open-source code. All that’s left is the difficult task of creating something unique. There are no books that teach you how to solve a problem no one has seen before. This is why I don’t want my kids to learn syntax. I want them to learn to solve problems, to dive deep into an issue, to be creative. So how do we teach that?

Yes I think, coding is solving problems and to learn to code teaches you a lot about solving problems. Of course you can learn how to solve problems without coding. So I think it boils everything down to something that is true for everything: learning something new is always great but as a kid (or an adult) you have to want to learn it. If you, as a kid, are interested in code it is great to learn it. If your father is a programmer even greater. You can do something together with your father and vice versa and you can learn the skill from a professional. If you have no interest in learning to code, it is useless (or almost) to teach your children how to code. The child will not learn it. Here in Switzerland, because we have 4 official languages, we learn in school French early on. But this doesn’t mean that every child in the German part of Switzerland speaks French. Only those which a strong interest in it will learn it to a degree that it is usable. Of course you learn how the French grammar and syntax works and how it sounds but that’s it. I had English and French in school from the age 7 on. But it was only that I learned to use English when I was 25 years old and went to a world trip. On that trip it was on my best interest to really use english so I learned it. French I never had to use (or had a big interest in it), so I can’t speak and read it till now, more than 30 years later!

The same goes with code. If your child (girl or boy) want to learn how to code, because that is something it has interest in, go ahead! If not, let it be. You child will do something else that it enjoys (like karate, a foreign language, swimming, chess etc.) and that activity will teach them a lot.

Okay. I read the article now. And, beside the black and white title, he just says: let your kids be curious and let them solve problems of any kind and they will learn what they need to learn to code or anything else that they want.

Yes, my opinion is the author is a hypocritical narcissist unabomber.

narcissist – He’s refusing to teach his children even if they are interested in it, which means it’s all about him and what he wants, not what his children want.

unabomber – He’s basically anti-technology claiming it ruins some aspect of humanity or childhood development, but “technology” is a subjective term based on familiarity. The Unabomber refused to own a car but had no problem using modern explosives technology and taking buses to wherever he wanted to go. I see this all the time with artists. They’re against photography and computers, but have no problem promoting on instagram and using extremely modern pigments and modern manufacturing which makes those pigments inexpensive. In fact, most of the tools a classics artist use were invented after photography, but to them photography is evil technology destroying humanity while their Cadmiums and Pthahlos milled in a modern factory and shipped in tin tubes (all invented after photography) are classical and totally allowed.

When it comes down to it parents like this are just narcissists who care more about their beliefs than what their kids need or want. This guy is totally going to teach his kids to drive (also a modern technology) because driving is essential in industrialized countries, but he is going to avoid teaching them how computers work even though computers are quickly becoming as essential as diving in a modern society.

The good news is, most kids who want to learn to code don’t have to go to their narcissistic fathers to learn it.

4 Likes
A free service run by Zed A. Shaw for learncodethehardway.org.