Ex 16 runs, doesn't actually do anything

I’ve reproduced the code exactly as it is written in the book, and the script runs without triggering any errors, but it doesn’t actually change the target file. Anyone else had this problem? Anyone solved it?

Hello and welcome to the forum @forumcarrot16

I am sure I had some problem with this one too. Just don’t remember what.
The bigger mistakes was easy. They could not hide themselves.

But most often there was a tiny thing that was very hard to spot.
If you would like to put up the code you have written here we can help to see whats missing or where the problem are.

There are a lot of friendly eyes in here

This the script in full. I don’t know what could be going wrong but I also don’t really know a lot about writing code. I’ve tried using different files, creating and deleting several different files. I’ve run this in Powershell and CMD. The result continues to be that the script runs as it should but doesn’t appear to actually DO anything. Hopefully there’s an error in my code and its not just a problem with my finicky computer.

Is the targetfile e.g. ‘filename’ in the same directory/folder as your ex16.py script?

Yes it is. The target file and my script are contained within the same folder.

I just ran your script and it is changing the file. 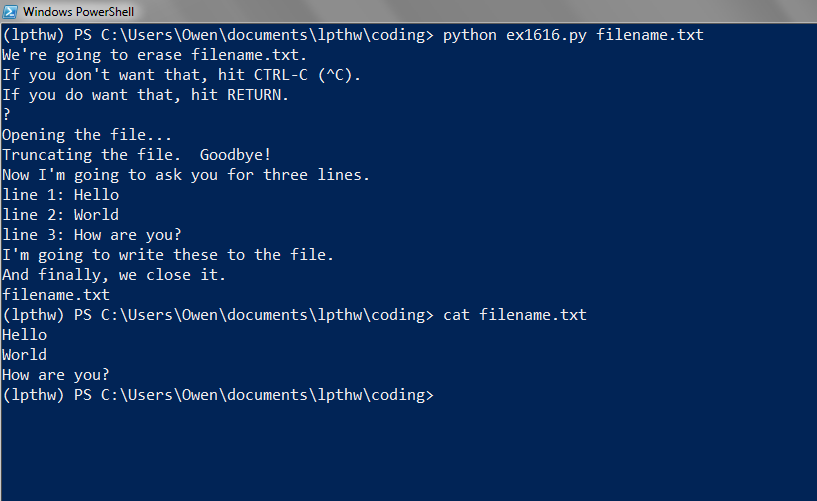 I have noticed at the very bottom of your code you are printing the filename argument:
print(filename) which just outputs the name of the textfile (in my case filename.txt)

When I looked at the actual file via the cat command on Powershell, it has indeed changed.

Is it the bottom line of code that is confusing you perhaps? View the filename text file via the cat command or open it in notepad after you have run the script to see if it has changed.

I put that short line at the end to print out the filename just to bookend the script.
I’ve been opening the files in notepad and they haven’t been changing. This is discouraging and encouraging at the same time. On the one hand, I know my script is right, on the other hand, I must be doing something else wrong. I’ll try calling the file with the cat command and see if anything changes.
This is the result that I get. Am I doing something wrong with the operation of Powershell?
ex16|332x225

I can’t quite spot any error here, and looking at your screenshot it seems like you’re running it right, so here’s some things to try:

I have no idea what’s going on then without actually watching you work.

You know, I think you’re close to solving this and what you should do is delete this code and rewrite it, but do it step by step and run it and make sure it’s working each time. Keep your old code around so you can look at it to see what’s going on.