I’ve run into a bit of a problem with Ex26 (enjoying it a lot, by the way).
I have worked through the code and corrected as many errors as I could see, then started running it in Powershell. It runs up to the point between lines 10-23, and this is where my problem lies. When the code reaches this point, I get an error relating to line 11:

So, I understand that the program is looking for two values, but only getting one (filename?). Am I right in thinking that there should be another line defining script?

Any help would be greatly appreciated. Code is appended below. Thanks in advance,

I’m just a few lessons ahead of you, but I think I know what’s wrong.

You need to move

to the start of your code, as you have to tell the name of your filename when you start the script

Then I found you are missing a ‘.’

Then it seems to work in my end.

Hello
When you are running this in powershell you must write the filename also.
For example:
ex26.py your_filename(Write the name of the file)

Try this I hope it works.

Awesome! Thanks very much!

Of course! With the arguments, you have to run it on a file. I’d forgotten that. Thanks!

The argv is a list which is just a…list…that contains two strings in it:

You can see what’s inside argv with:

What that line does is “explode” the argv list out into the two variables script and filename. It’s the same as doing this:

That makes a lot of sense, thanks for the breakdown.
I created a simple text file, and used its name as my filename argument when running ex26.py, but powershell is saying “no such file or directory” for the file that I called. I’ve checked and the file is clearly there in the same directory as the exercise. I’ll go back and look at the code immediately after, relating to what it was going to do with the file.

Thanks again for the help, folks.

If you get that error then the file is not there. Do ls (ell ess) to see what’s there. This usually happens because people don’t save the file in their text editor.

Hi Zed,
Thanks, I had checked this already, using ls. I created a simple text file, called “sparps”, and it’s visible in the same directory as my exercise files (bottom file). I’ll paste a screenshot below. Tried using “sparps” and “sparps.txt” as my filename argument, but neither worked. 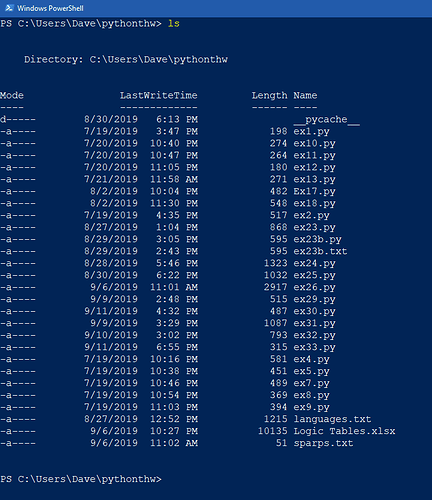 You should probably post the error too. Also you don’t need to post an image, just do this:

That’s way easier to read. Chances are you are getting this error but it has nothing to do with the actual file you think it’s working on. You should print out the variable your passing to open on the line that’s listed. For example:

If the file is there and you get an error trying to open it then probably file_again is wrong, so print it out.

I hope this helps

Thanks Catherine. Appreciate you taking the time to spot where I went wrong!