Ex43 Questions about the code

I have new questions about the code from ex.43:

Explanations would be much appreciated.

Re:
A.
“In line 2, when the object a_game is created, what exactly from the object a_map is given as parameter?”

OK, after searches and readings, I think that in the code

Ok, so… You can give that self.scene_map any value you want when you initiate the engine. It would break the code, but you could give it a dictionary, a list, a method, a class, anything.
The real work is done in that play method. It uses that a_map class you initiated - Map(‘central corridor’).
That class object that you made my assigning a_map=Map(‘central corridor’), is what controls the shifting between scenes.
All play does is tell it (the Map object) to go/run/execute it’s methods:
Opening_scene and next_scene.
The work is being done in Map, and not engine.

Thank you for your reply!

You can give that self.scene_map any value you want when you initiate the engine. It would break the code, but you could give it a dictionary, a list, a method, a class, anything.

Yes, I agree that if self.scene_map would receive another value, the code would not work. I am curious how Python sees the parameter a_map in the code

I know that a_map is an object previously defined, but in the code above a_game is an Engine class and has access to the a_map object’s methods and attributes (but does not inherit them) and a_map is also a parameter/argument given in Engine(a_map). But it is not an usual parameter, because self.scene_map takes no value throughout the game. What kind of value is it then, what is the type of this variable? A string? I am curious how Python sees this piece of code.

I am not sure if I made myself understood…

The work is being done in Map, and not engine.

As far as I understood the code, the code in Map only returns the value of the given key from the dictionary. The code in Engine (more exactly in the while) is the one that does the shifting between scenes:

Now I’m curious how to explain. I’m going to go to the exercise and I’ll get back to you. It’s been a long time since I did that exercise

Ok, so a_map is an object. It is the whole class:

If you look in the Engine:

self.scene_map is that ‘a_map’ you passed in, which is the Map class object.
The current_scene = is calling a method from the Map class.
so is the last_scene =.

The engine just tells Map object to go.
The a_map is an object, a class with all it’s methods passed into the Engine.
If you look in the separate classes for each room, they too send information back to the Map object, which is controlling the game by sending you to the next room according to the choices made in each current room.

Inheritance and attributes are completely different functions of a class.
There is no inheritance going on in Engine. The Map object is simply an attribute.
Information is being passed around through the methods in each function of the rooms and the map. Look for the return statements in room, draw a picture to see where and what information is being passed around, I think it will help visualize what is going on.
Particularly look at the ‘next_scene’ function/method in Map. 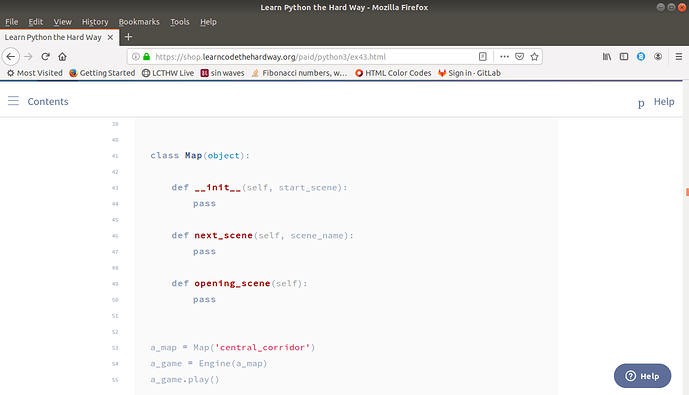 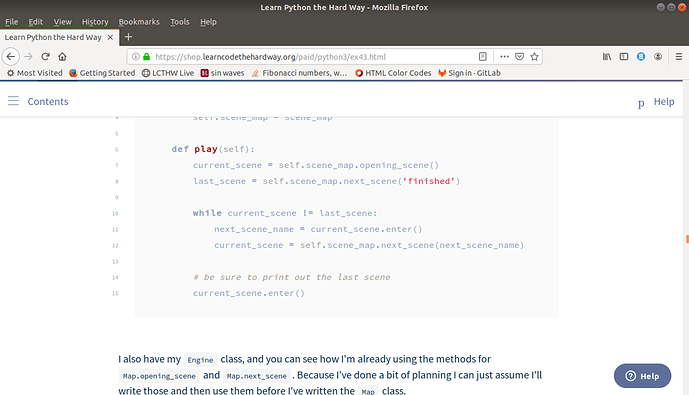 The Map object is simply an attribute.

So in the code:

the object a_map becomes in the context of the above code an attribute. Whose object is this attribute? It for sure does not belong to a_game.

yes it does… it just as a different name.

Wait, I think your text below made me realize.

self.scene_map is that ‘a_map’ you passed in, which is the Map class object.

Yup. And this is why naming a variable can be so very important.
I believe it is totally legitimate to just keep ‘a_map’ as the name instead of ‘scene_map’ in the Engine class. I’m not sure why he changed the name like that, maybe it’s a naming convention thing.

I printed all attributes of the object a_game, and a_map is not an attribute of the a_game, hence my confusion…

Now I’m curious, what did it list as the attributes?

He did not write a_map instead of scene_map because a_map is just a value given to the attribute scene_map. A_map is not an attribute. And you cannot call a method from a value, you have to use the attribute.

you see in the first line that there is no a_map attribute, but there is a Map object as the value, which is a_map(I assume)
Yeah, the answer was there all the time… I did not know how to read it

you can give an init() attribute any name you want.

I didn’t test that, but the concept is correct.

What do you mean here:

you can give an init() attribute any name you want.

I mean it’s a name. a place holder, a variable that holds a value. You can most certainly call a method from a variable. If that variable is a class. That is how class’s work. I can make a class with ten attributes, all other class’s if I want to, and I can name them anything I want. The name space, is held in the class’s dictionary which is a whole bigger conversation, That namespace can hold anything. From a class, to a method, to a string, bool, anything.
When I declared something as Hello() in that recent example, that variable now holds that class as it’s value.
When I pass that variable into Spam as an attribute, it gets stored in Spam’s dictionary as 'something variable. I can name that anything I want to, it is protected in the class’s dictionary.
But I imagine it really bad code to have variables with the same name and different values in one script, even if it is protected in a class dictionary.

Thanks for the explanation.

Yes, it is a good explanation and a good reminder for me. Thanks a lot! It has been fun!

One last thing: Check this out, this code will function the same as that previous example. Look at the difference. I’m sure you got it now, but I think it’s worth looking at it this way too:

Thanks a lot! Awesome examples!

It did take some time to understand them and the difference, but I think I got it.
I did not know you could do that:

But as you said, you can pass anything, any value/class.

1 Like
next page →
A free service run by Zed A. Shaw for learncodethehardway.org.