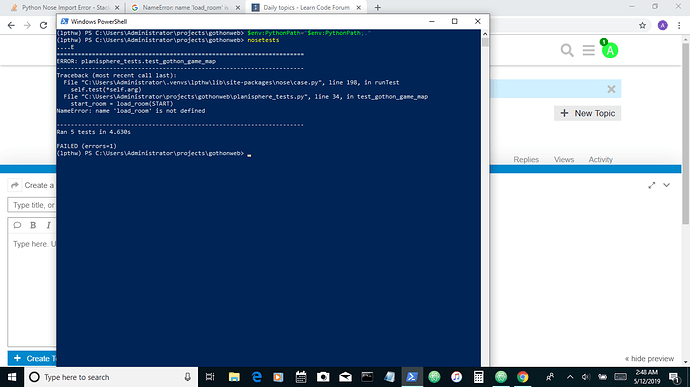 Most of the time if you get a NameError it’s because:

is the above code correct?
thank you for the help

)
NameError: name ‘self’ is not defined

Sorry to be such a pain!

Hi @ailsagy can you post the code for the class load_room? We would understand better what is going on. Put your code in brackets like this:

Another thing would be that you go back to earlier exercises in the book (EX40 to 45) and try to relearn some basic concepts about OOP.

I’m sorry @ailsagy but you’re still giving everyone not enough information to help you. There’s simply no way to figure out what’s going on with only a single screenshot and tiny single lines of information. Even if you posted all of the code, you’re still coming and asking for help but not really doing any of the work you need to do before you ask for help.

Please go and figure this out on your own first. You should know what self is by this exercise. You should know how to find a NameError. Based on that I suspect you also have been skipping through the book and not carefully studying. It might help you to start at the beginning and refresh what you’ve learned so far.

Finally, I would really love to know why you post so little information. Is it a language problem? You don’t speak English well enough to write up your help request? Are you embarrassed to ask for help? Maybe if you told me more I could help you.

Hi @ailsagy it’s not all code, but maybe it is enough to figure out the problem.
You use the variable load_room in the function definition of __init__

But you define the variable load_room after that assignment. So Python doesn’t know yet that variable. That is what the error: NameError: name ‘load_room’ is not defined

thank you for your help!

There you go, your init line is the problem:

You have a class named Room (capitalization matters A LOT), so you’re going to have major problems if you then have a variable named Room as well. Every thing gets a new name and capital letters are important, so Room is the same as Room but different from room.

Next, when you do start_room = load_room you’re saying “I want start_room to default to the variable load_room” but load_room isn’t defined anywhere. Then later on you try to use load_room. I suspect you actually meant:

But you also aren’t very clear in why you need all of this, which leads me to my next suggestion:

“I have a sandwich cheese that uncovers you love it yes?”

I am not sure if you resolved your problem yet. I was getting the same error message that you did and it took me a while to figure out why that was. I typed all of the code as in the book, however I forgot to change the following:

As the result, it was not importing all of the functions after the Room class and it was not able to execute them, after that change everything worked. Hope this helps!