Im preparing myself to exercise 45, where I have to create my own game.
I was thinking to structure the game in a way so all my rooms are in a separate fil - Rooms.py.
However I can’t seem to get it work properly, or maybe it’s me who don’t understand it right.

I have my main code:

And I have my second code called Rooms.py - in same folder with the following:

My problem is I can get the SecondFunctionTxt() function to run, but I can’t get the method to run inside the ‘Second’ class.
I get the following error:

I can see how I can just make a bunch of function for all my rooms and be done with it, but shouldn’t I also be able to access classes from my main code?

You are accessing SecondClassTxt by referencing it via the class, not via an instance of that class. In that case self is not magically filled in, so your function call lacks one argument.

To make it work you’d have to instantiate Second in Main:

In order to avoid making multiple instances of a single class I’d recommend that you create one instance of Second as an attribute of Main and use that for all method calls:

To make it work you’d have to instantiate Second in Main :

Thank you @florian for this.

I really like how straight forward composition is compared to inheritance.
I took it a little further, and before going down the rabbit hole i just want to make sure I understand it rigth.

If I would make a bunch of classes in my imported script and instantiate them all from Main() would I do it this way?

I assume self.AllRooms = Rooms.AllRooms() will make an instance of First(), Second() and Third()?
Is this the way to do it?

Yeah, I guess you could do it that way.

But why not make it more explicit and instantiate each room in Main?

I would not bother adding Rooms as an attribute just to access stand-alone functions. You can always call Rooms.something().

I love your enthusiasm but this will only end in disaster.

You should adopt the style of:

Next up, you’ve got to build this up in pieces (and I think I’ve mentioned this before). First, you should write just this code:

If that doesn’t work then none of your crazy schemes are going to work. I think this kind of thinking is an art all on its own. This idea of “what’s the bare minimum first thing that has to work for my idea to work?” If you can get into this mode of thinking logistically about what do you need to do X, then it makes it easier to slowly build up working code.

Now, my code sample above still doesn’t work, and that highlights a potential error in your thinking about classes. See how you do this:

Or in my code I do this:

But, hold on, Second is a class right? You can’t just call a function on a raw class like that. I mean, yeah there’s ways, but it’s not what you want. If you want that then make a module, not a class. What you actually need is this:

I think you should study this and then drop back with an explanation about why you thought:

Would work. That’ll help me figure out where your understanding went wrong and correct it.

Now, last thing is, I’m not so keen on the self.rooms part, since you already have the module imported. Attaching code to self is kind of pointless, but explain the design idea here. Maybe I just need to read your idea to understand it.

Merry Christmas to everyone in here.

Hi @zedshaw I’ve been of the grid for a while due to family commitments. I’ve first had time to pick up on this again today.
I didn’t read your comments before I had started to lay the framework for my game. However, I think it still has the same problem because I got stuck in with the same issue and had to go back to reference this thread.
I hope it’s OK to use my new game as a reference as it has more descriptive names and I can better explain my current thinking.

What I want to do is create a game that circles through different locations, where various things happen, - like your own game - I’ve called it the “dating game” as I thought it could be funny to make something around how people find love. 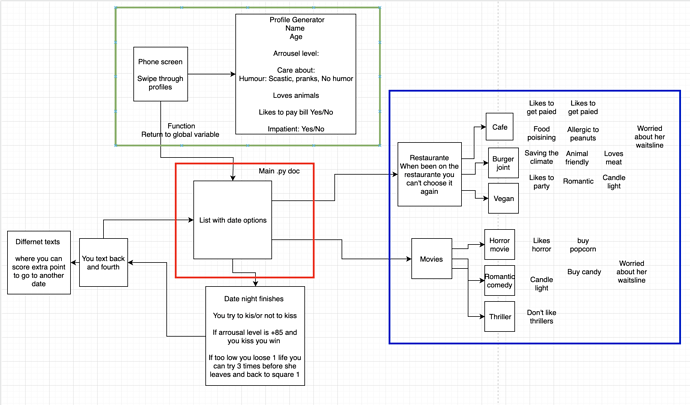 What I found annoying when I did my first initial game was that all the locations got muddled in-between the game and the map engine, so I thought it would be an excellent exercise to put all the locations in a separate .py file.
I’m currently using your suggestion to have a print out of your game in a different room to only access for inspiration when needed, so my code is very early stages - trying to get the map and engine to flow before anything else.
Currently been testing if I can access classes in my second imported .py (ex45B)

I currently have my main code (Engine):

You should adopt the style of:

Thank you for correcting me on this.