LP3THW ex23 Is there some text missing in my ebook?

Hello, I’m new here. I am doing LP3THW, and since I know some Python already, I skipped ahead a bit to ex23 because it sounded intriguing. I’m using an ebook on O’Reilly’s site, Safari Books Online, now called learning.oreilly.com (subscription required so I’m including a screen shot). Unfortunately they don’t show page numbers.

Before the image of a command and results in the terminal, it says there will be “some example commands.” The results show the first 4 lines from the languages file, then jump to the last 5 without explanation. This confused me because my terminal appears to have printed the whole file start to finish. Reading on, the book mentions that there are several different encodings to demonstrate the different errors they generate. Well, I only saw that one, and there are no more screen shots of the terminal until it gets to “Disecting [sic] the Output.”

Hmm, a typo, which tells me that I must have an early version of the book. Safari seems to get the first version, sometimes pre-release, and never update it. Is that what happened here? If so, how can I see the updated version?

Let me know if you don’t see the image. 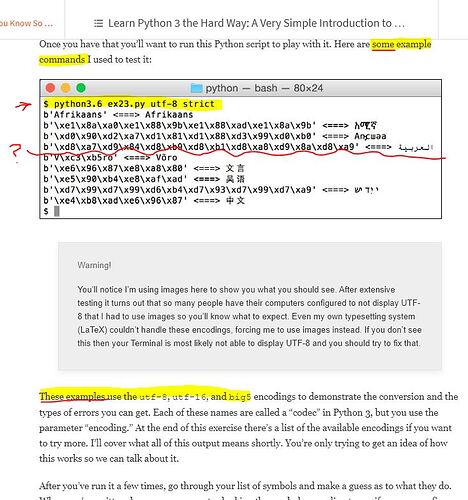 Yes, so first, I don’t have infinite space in the book so I abbreviated it. That’s all. Nothing wrong or an error, I just didn’t spend the space to show the whole big file.

Why did I include the whole file? Because people get fairly uptight about their language and if I didn’t include every one I could find someone would complain I discriminated against them. In hindsight I should have use emojis but those don’t work in most terminals.

Otherwise it should be fine to use this book. I think it’d be impossible to spell out every tiny little thing in exacting details in the book, so that’s why I have videos. A 5 minute video showing you this would take about 200 pages to fully and totally explain.

Hi, Zed. I’m not as concerned about the missing middle of the file, although maybe it would be clearer if there were an ellipsis or a line saying lines X through Y omitted for space.

But when I saw plurals, “some example commands” and “these examples,” when there’s only one, and that the examples use utf-16 and big5, when I don’t see those examples, it makes me wonder, and also wonder why aren’t other people asking the same question…

If it had instead said, now try the same thing and replace utf-8 with utf-16 and with big5 and see what happens, that seems more complete. Looking ahead, that is what comes under Encodings Deep Dive. So I’ll just move on. Maybe you could clarify in the second edition… thx

FWIW, I remember that I noticed quite a few inconsistencies like this when I worked through the book. The same goes for Learn C, although there it’s mostly linguistic errors, the kind you get when you copy and paste sentences around, missing words etc. It doesn’t hinder anything, but still… I wonder, shouldn’t your editors flag such things? It’s a little at odds with the fact that we need to learn to be exact in programming. Just saying…

Interestingly, the JS book, albeit not finished yet, seems much better in this regard, and the second Python book too.

I think I’m not understanding the issue here, but you’re saying that, because I say:

But only include a single image, that this made it harder for you to understand, and if I had written:

Then you’d have had an easier time?

Yes, exactly. I thought some examples must have been left out. Unfortunately it happens quite often on safari that we get early releases with missing or wrong content, placeholders, that kind of thing.