More than a month ago I started with the Learn Python The Hardway course. Up till now everything went very well. However when doing Exercise 25, I got stuck. In the Exercise you need to define some functions in Atom and save it as a .py file. After that you have to run python in the terminal and import ex25. I did all of that, but I get the error: ModuleNotFoundError: No module named ‘ex25’. I searched on the internet on how to fix this error. I found something about putting the file in the same directory. Therefore I saved the ex25.py file in

In this folder I saved the ex25.py file.and then typed

This finally worked. The python files can now be clearly arranged.

But I am still not totally satisfied. It seems like it should have worked in the first case. In the corresponding video the file is saved in the same directory as where all the other exercises were saved in my case that should be

However, in my case I get an error when I import this in python. Do you have any idea what the reason is of this error? Do I need to do something differently?

I enclosed a screenshot of what I get when I try to do the exercise in the terminal, where I saved the ex25.py file and where python is located. I am sorry for the Dutch language, but I do not know how to get it in English. I hope you can help me with my problem.

Thank you in advance! 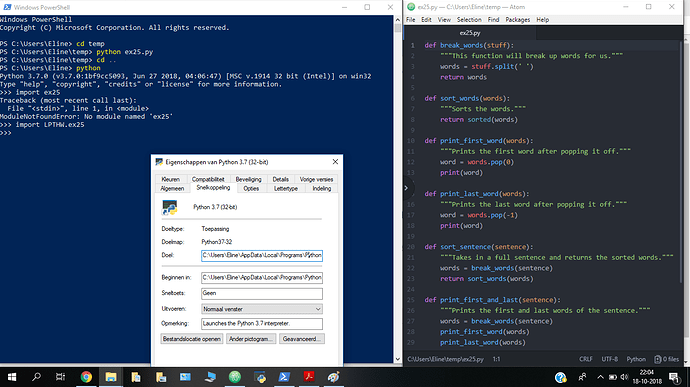 yours seems to be C:\Users\Eline\temp>

Thank you so much!

Correct, you can definitely run python when you are in another directory!