New to forum, question on C

I am working on the Extra Credit on ex10 and just need a nudge on how to approach this. Please no answers, just looking for some friendly push in the right direction.

Hey @abbyrjones72, I saw your email but I’ll answer you here. So, how about you start off with writing up what you tried, what you’re struggling with, and what you think might be the answers. Then I can better give you some hints on where to go.

I’m actually going to spend a week or two on nested loops in hopes of mastering them. These are my weakness, and there is no excuse for that, so I will come back to the lessons when I have done at least 40 hours on my own of practice.

Nah, don’t do that. Punishing yourself for some kind of “failure” isn’t going to help you learn the topic. Talk to me. Take the time to explain out what the extra credit is, what you’ve tried so far, show me some code, and what you think the answer might be. You’d be shocked how well this works to help you figure it out, and if it doesn’t then I can help you figure it out.

Okay let me work something up and I will send it. I have some things to do today, but tonight I will have time to devote to this.

I cancelled my plans.

Here is what I have so far. I am trying to dynamically count the number of args and pass them into the second loop where I used if-elseif statements.

It compiles with 1 warning but doesn’t not accept arguments.

Let me know if you need more clues.

Okay this is what I have so far and it is working for under the conditions of the first program, accepting only one argument. A few questions:

First up, get rid of the if-statement. That means cut it out entirely. It is dead to you. It must die for you to see the light. Remove it. Delete it. This is the only way.

Now for a new clue:

Why did you get rid of the two loops and replace them with one loop that now has an i, and a j, but then you don’t use i and just use 1?

I suggest you delete this code and try again. Go back to that code you showed me first as that’s more correct than this code. Now, you have to do this following:

This will work but you have to recognize something I see you doing:

That means, you need to stop rushing. You need to do this lock step, 1 tiny thing at a time, slow down, do not jump ahead, and do it in tiny logical working chunks. Get one tiny thing working, then move on.

Try that, come back with your new for-loop-only code and an explanation.

I am in a hurry, yes. I am not pretending to be an expert. I know nothing about C and I am here to learn. I will do as you say and get back to you with the loop. And I will slow down for sure. It’s something I’ve always done which is why I am having this problem. Thank you for helping!

Yep, rushing your learning is just going to frustrate you and keep you from progressing. Take it slow. Incidentally, I code low as hell. But I’m consistent so it’s a good strong pace and I end up doing better work faster because of it. It’s better to go slow, be accurate and thoughtful, and then as you get comfortable you just speed up but without errors.

If I can use learning to ride a bicycle as an example: I learned to ride a bike by going slow with training wheels and being careful, and then when I was able to go fast and stay up on my own the training wheels came off. You’re kind of hopping on a motorcycle and flying at 120mph then slamming into a wall and jumping up and going “Why doesn’t this work?!”

That last thing actually did happen to me as a kid on a mini motorbike lol. I crashed into a barn door that was leaning against the barn and it trapped me for 15 minutes until someone rescued me lol.

I know what the inner loop is doing now, and how it increments based solely on the conditions in it before exiting and going for another iteration of the outer loop. I have done some examples to make myself learn it.

Okay this is my understanding of two for loops. (in the comments) 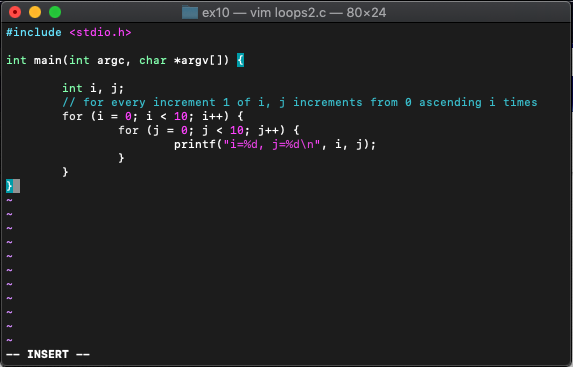 Ehhhhhh, that’s too complicated. I think what you’re doing is you’re combining the two forloops into one thing when they’re two totally separate things. Also, this is good to read as it shows me what you’re thinking so it’s easier to fix it. What’s going on is:

The key to your misunderstanding is you have a comment saying what the two for-loops do only on the first for-loop. There are two, so you have an outer loop, and an inner loop. You have to disconnect them and treat them as separate entities that do one job.

So, now let’s strip this down further. Rip out everything except the for(i) loop (outer loop), and print just i. Now, see how that goes from 0-9.

Now, put restore your code from your backup and remove the outer loop. See how j now changes only from 0-9?

This shows you that what happens is after every iteration of the for(i) loop, the contents are reset, so then your for(j) loop starts over.

Think that over then write me back a new explanation of what’s going on, and then answer this question:

I know that loops aren’t language specific, but I bought your LPythonTHW book and want to change gears a bit and come back to C. I feel that Python is a better general language for my knowledge at this time (I’m getting another masters in Data Analytics and we are using Python and R). I’ll see you on the Python boards!

I do understand how they are independent loops now, however. I was mixing up my thinking because sometimes we can make j<i and then the inner loop is dependent on the outer loop. In my example that wasn’t the case. Is that right?

Uh yes, if you did that inside the inner loop then it’d get weird, and actually you wouldn’t do that unless you have a specific algorithm you were doing.

If C is your first language then I highly recommend you go do Python first. C is a terrible language, whether it’s your first or 20th. It is not fun to learn, has too many gun-foot scenarios, and won’t help you be any better as a programmer at first. Go learn Python. Then I’d say, JavaScript or Ruby, THEN try C.

Java is the language I am most familiar with. I have an intermediate knowledge of it, along with some design patterns like Builder and Factory. However, I wanted to learn C because it was closer to the hardware. Python is the goal right now because of the year-long code school I am hopping into. Your book has already helped a ton.

Ah, then I’d say you definitely want to go Python then C. Python is actually really close to Java in its design, but with a simpler syntax. That’ll get your brain back into coding and then C can come after that. C’s difficult is mostly in dealing with the platform.