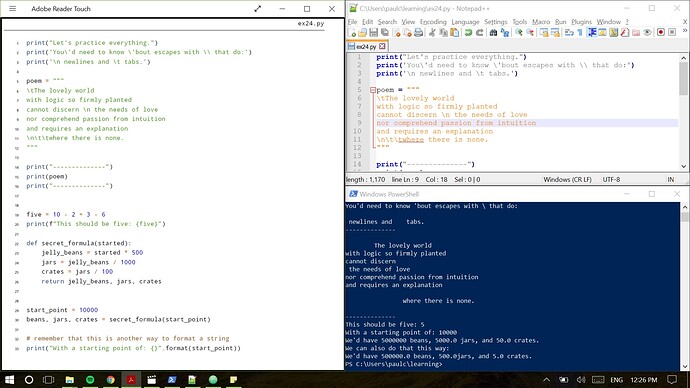 I’ve just been copying ex24.py into Notepad++ and running it in Powershell. It went pretty well, but …

When type the text into NP++ and run it in Powershell I do get an indent of 8 spaces instead of 4 from the use of the escape character “\t” in the section where I run “poem”.

I’ve tried deleting and re-adding the character, not sure what else I could do to see what causes this. Perhaps I have Powershell set up incorrectly?

Now I also notice that in the video Zed gets that same double indent, although it doesn’t appear in the .pdf. Can someone explain what happened?

(Again, sorry if this is too trivial.)

I wouldn’t too much about output differences like that. Most likely the software I use to produce the PDF thinks I want all tabs to be spaces.