Really looking forward to learn from this one. I feel that anything memory-related is worth knowing. Here is my code. Can you give me some helpful hints on what I am doing wrong, and where I might need to look? I did research what you asked. 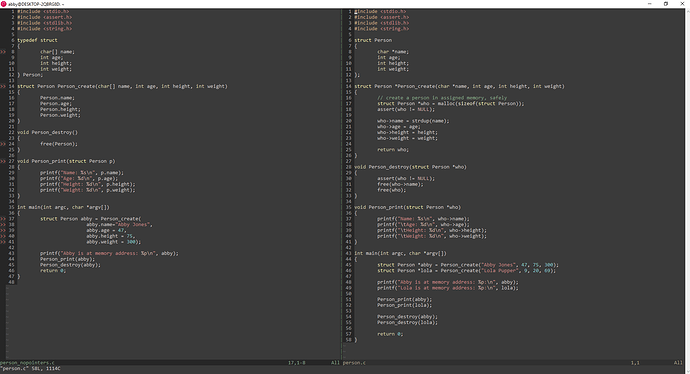 OK, don’t trust me too much on this – I’m just a few exercises ahead of you. But I think I can spot a few things.

(6) You are making a new type, but later on you still refer to struct Person instead of just Person. Either use only Person afterwards or add Person at the end of the line to give the struct a name: typedef struct Person {...} Person;.

(8, 14) The brackets that declare that something is an array go after the identifier, not the type. char[] name is wrong, char name[] is right. In this case though you’ll want to use the pointer version of a string, because C needs to know how big the struct will be, and a character pointer has a fixed size: char *name.

(14) Person_create
Alright, you keep your struct on the stack, but you still need to create one and bind it to a variable – the declaration at the beginning of the file is just a “blueprint”. Also, Person.name is a reference to the name variable inside the struct, but this line on its own doesn’t assign anything. Try this:

You could also create and populate your new person in one line: Person new = { name=name, age=age, ... };

(22) Get rid of Person_destroy. You don’t need it here because you can only free memory on the heap. Memory on the stack is freed automatically when the function exits.

I hope this helps a little! I hope @zedshaw will chime in…

Interesting. It’s almost like you are kind of mixing the concepts of heap allocation with the concepts of C’s struct allocation. First up, I’m just typing this raw into my laptop at 4am so I have no promises this code works.

First, you have code that you totally don’t need if you go with C’s allocation of structs. You can just write this:

And you’re done. Time to move on with your life. That’s it. No free, no alloc, no extra function doing the exact same thing, nothing.

However, if you want to go the “allocate structs on the heap” way, then you need your functions, but you’re calling them wrong. There’s also a hybrid approach I’ll hint at in a minute, but to do this style you need:

In that style you then need Person_free, and you’d need to also copy all input strings, and free them as well. You can’t just set new->name = name, but have to do new->name = strcpy(name) but even that’s got problems. Just go with that for now then read up on how terrible strcpy is.

What’s the hybrid aproach? You are soooooooo close to stumbling on this so I’m just going to leave one line of code here to see if you can figure it out (assuming this code would work):