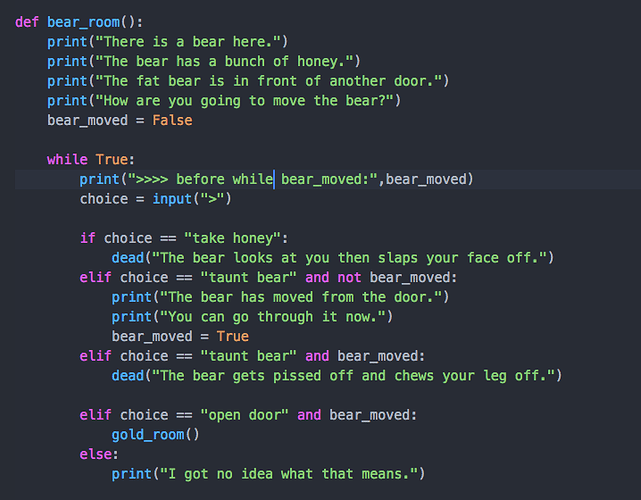 when I input “taunt bear” in the Terminal, it directly goes with the first elif instead of the second one since they both are “taunt bear” is this because of the definition that ( Python searches for the first true condition and carries out its associated block of statements)

It’s been the whole afternoon that I am stuck at this part. I tried to change the “and” to “or” it gives me the else print(“I got no idea what that means ) as the answer. I also change the second “taunt bear” to " laugh at bear” as something different from the first one to see if it will work but still give me “I got no idea what that means” as answer

To understand better, try Changing that initial “bear_moved” to None.

Not is like an on off switch. It’s checking if something is ‘on’ or if it is ‘true’.

The not will see that something is there.

It’s tricky. Play with it.
Don’t be afraid to alter variables to see what happens.

Yes, the and not bear_moved is part of the boolean expression, and if both of those are true then this will run. Remember the truth tables for the logic in the book? Also, it’s kind of like this:

I think what trips people up is they read it as:

But it’s not saying “if choice is taunt bear and choice is also not bear moved”. That sort of makes no sense right? Instead, it’s always two things around an operator, so you can think like this:

See how I have kind of a tree here? Ponder that for a bit.

Ok, but you keep missing the most important word:

Focus on that, it’s the top of the tree. If I do this:

It will evaluate x, then y, then if both are true, do that else. I think you’re seeing only the x then only the y and ignoring the and.

Also, why are you not printing? Remember that you cannot see what the computer is doing by reading code. You have to print, print print, like this:

Put that at the top and watch it, and see how it changes rather than trying to decipher the code in your head. Another way to put this is, your brain is almost always wrong, so never trust it, always measure, and you measure using print.

Thank you Zed. I will remember to do more printing from now on.